What’s Next for Robert

Robert, a resident of The Arc Jacksonville’s Jammes Road group home, decided to see what other Arc services were available to help him reach his goals. After a disappointing and unsuccessful job search, he took a new approach and attended the Day Training Program at the downtown location.

“My initial goal was to make as much money as possible until I could find something better,” he said. Instead, what he found was an opportunity to grow and take an unexpected step forward.

Robert was recently offered a position as an Arc Jacksonville AmeriCorps member. Shocked at having been considered for a position, yet unsure of the responsibility, he turned it down. However, after being encouraged by a staff member and previous AmeriCorps member, Robert finally decided to accept the position.“It showed me that they believed in my ability, even when I didn’t,” he said. He was proud to have others in his corner so that he didn’t feel alone. Having their encouragement helped him take a new step in life and realize more of his own potential.He appreciates The Arc Jacksonville for providing opportunities to explore different things. “The Arc is really big on [saying] that people with disabilities aren’t defined by their limitations,” he said. Robert is still getting used to his new position but is excited to have made the transition from participant to AmeriCorps member.

“I am thankful for the opportunity,” he said. Because of The Arc Jacksonville, Robert feels he has a clear idea about his next step in life. 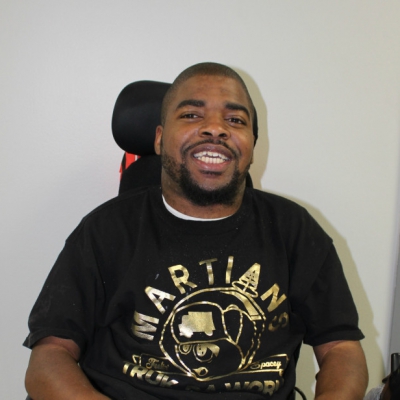